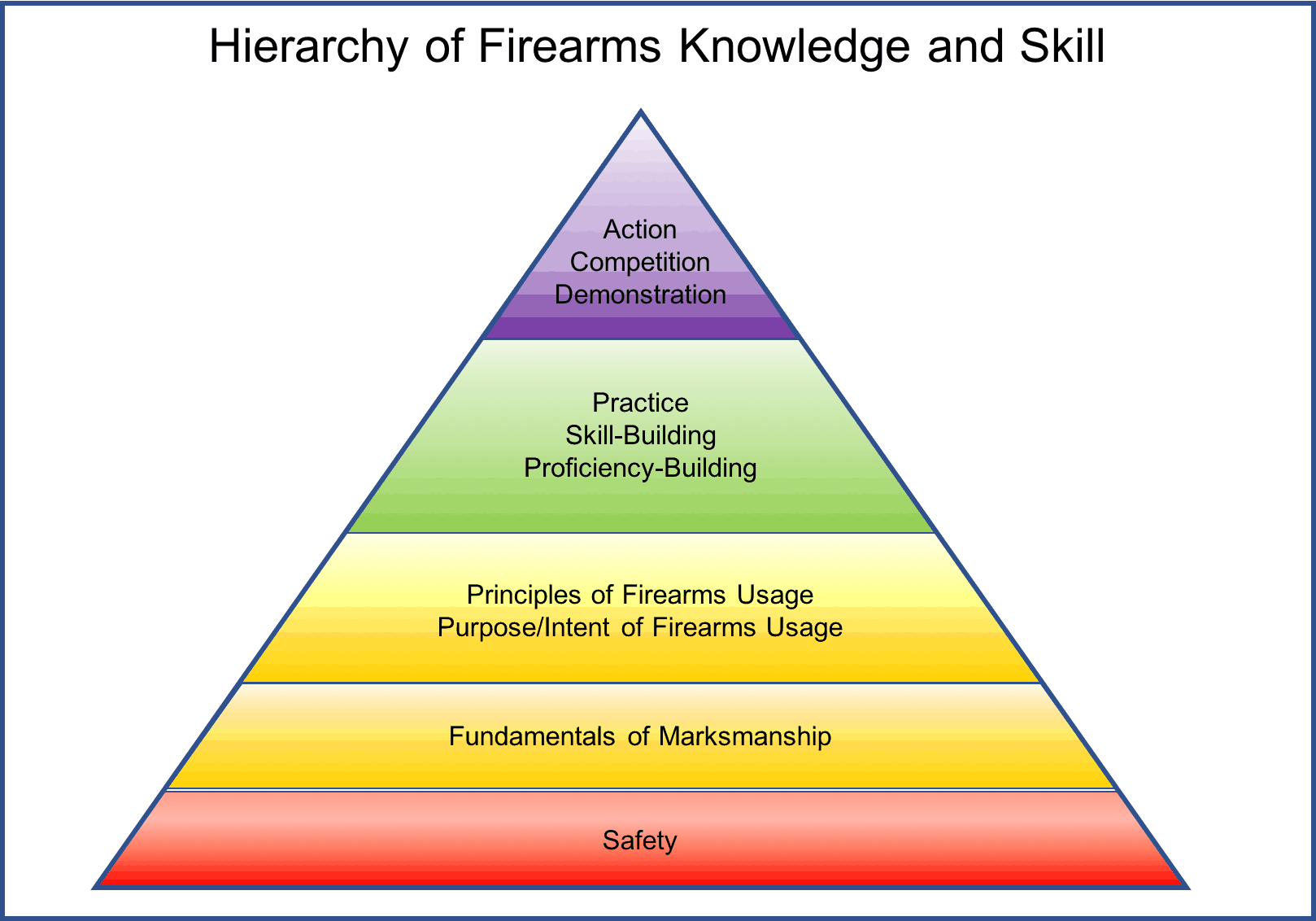 -A brief acknowledgment: Though they do not know me, it is of professional importance to give credit where it is due and thank Massad Ayoob and Daniel Shaw for sparking the thoughts of this article as I listened to Daniel’s Gunfighter Cast, audio podcast while driving home one afternoon.

-Many Thanks to Bob Cutajar for adding his ideas to my own in writing this article.

The pyramid and the triangle are utilized as some of the strongest structures in engineering.  The

ancient Egyptians built the most recognizable structures in the world that have lasted millennia by demonstrating the strength of those simple geometric shapes.  As such, I will use them to visualize the philosophies, principles and skills involving firearms by creating what I’ll call the “Firearms Hierarchy Pyramid.”

The lowest part of this pyramid – the foundation that everything is built upon – must involve safety.  Shooting has an inherent danger to it and safety must be ingrained into every thought as well as each current (and any anticipated future) action that the shooter contemplates performing.  This is non-negotiable!

The next-higher level of the pyramid is focused on the fundamentals of marksmanship.  Every shooter, regardless of their reasons for possessing firearms, must understand these fundamentals in order to be successful at shooting, i.e., hitting the target!  Grip, stance/position, sight picture and trigger control all contribute to safely, accurately and consistently hitting that target.

Once firearms safety is automatic and the fundamentals of marksmanship are consistently practiced, the shooter must define their intentions regarding shooting.  Is she looking for a self-defense tool at home – or everyday carry (EDC)?  Is he wanting to join one of the fast-growing and exciting shooting sports (like IDPA)?  Does she fancy the idea of harvesting her own meat from hunting game animals?  This definition of “intent” is often skipped, or dismissed…but it will drive the rest of the contents of each shooter’s personalized “Firearms Hierarchy Pyramid.” 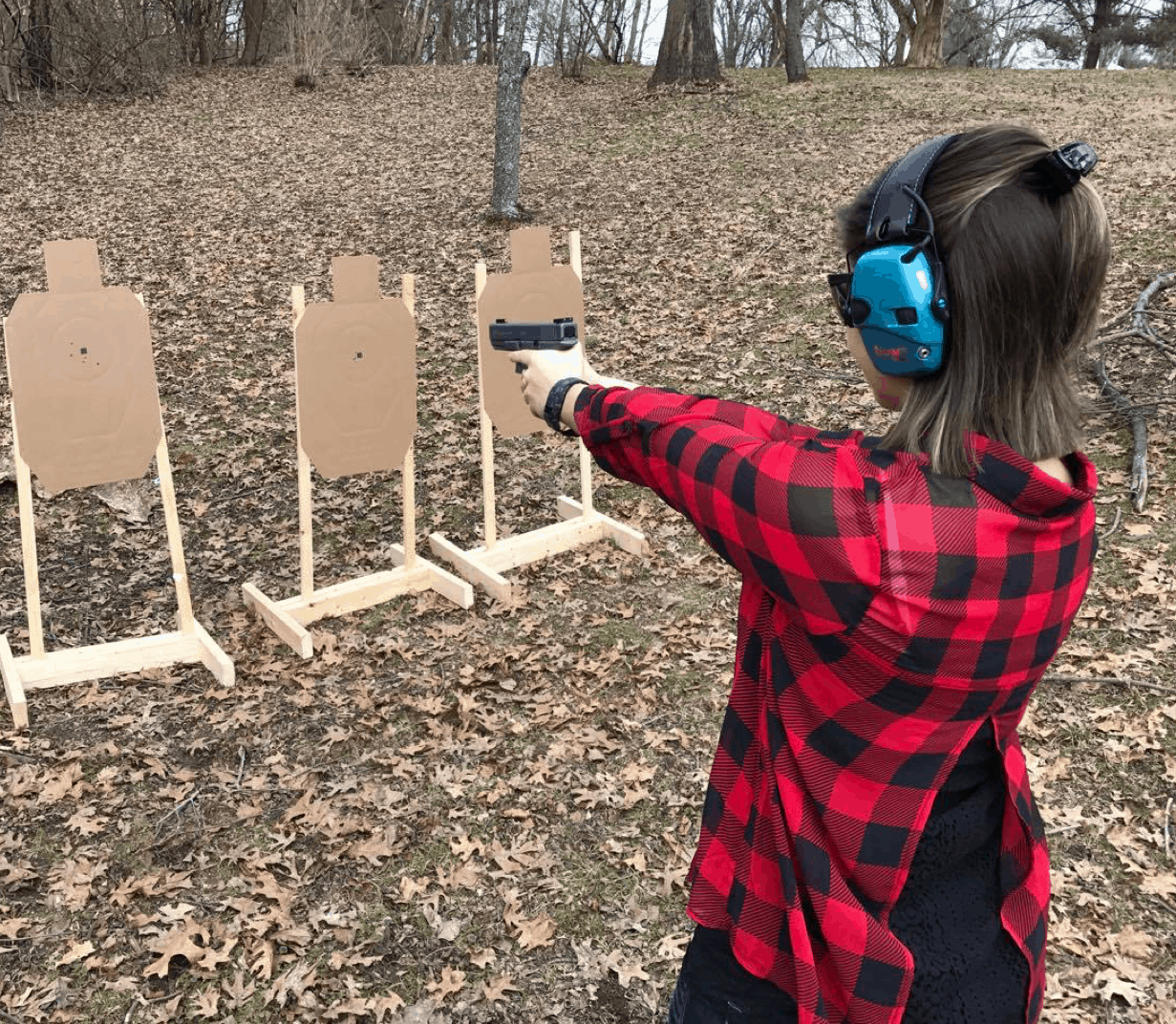 Defining that intent will help the shooter determine skill/proficiency-building and practice: the knowledge, techniques, training frequency, practice habits and even the specific drills needed to build upon those foundations of safety and marksmanship fundamentals in order to continually improve their personal firearms journey.  Personal interests will drive the type and amount of reading material, the videos available online, and even the friends, acquaintances and activities with which you’ll become associated.  For those wanting or needing to build an even higher level of mastery (for personal or professional reasons), professional instruction in a specific interest area may be the most cost-effective method to quickly improve effectiveness, eliminate anything non-productive and to add new knowledge and skills.

Finally, the capstone on your “Firearms Hierarchy Pyramid” is your demonstration of your cumulative shooting skills to achieve your intended personal goal(s).  If you are shooting in preparation for self-defense, we hope a real-world demonstration is never needed, but you can demonstrate it in either a friendly challenge or through an organized competition.  If your goal is to hunt your first wild boar, successfully harvesting that animal is the peak of your pyramid.  If you are an armed Warrior, maybe the peak of that pyramid is the utilization of your skills in defense of yourself, of others, or of the freedom and liberty that every American holds so dear.

As with any structure, the higher you wish to build your “Firearms Hierarchy Pyramid,” the wider your base – and each level – must become.  For example, casual target shooting with a .22-caliber rifle at a stationary, 2-dimensional indoor range requires a more-narrow set of parameters than, say, competing in an international shooting competition open to professional shooting teams from law enforcement, military and sponsored civilian shooters.  Likewise, going to an organized-release pheasant hunt will have a different set of parameters than a dangerous game hunt on the African continent.

It is up to the individual shooter to determine how tall and how wide their own “Firearms Hierarchy Pyramid” should be. As any engineer (or child playing with building blocks) can tell you, building your pyramid too tall – with too narrow a base – is a bad design…and, when dealing with firearms, the consequences can be dangerous and disastrous.  Be Safe – and Happy Building!! 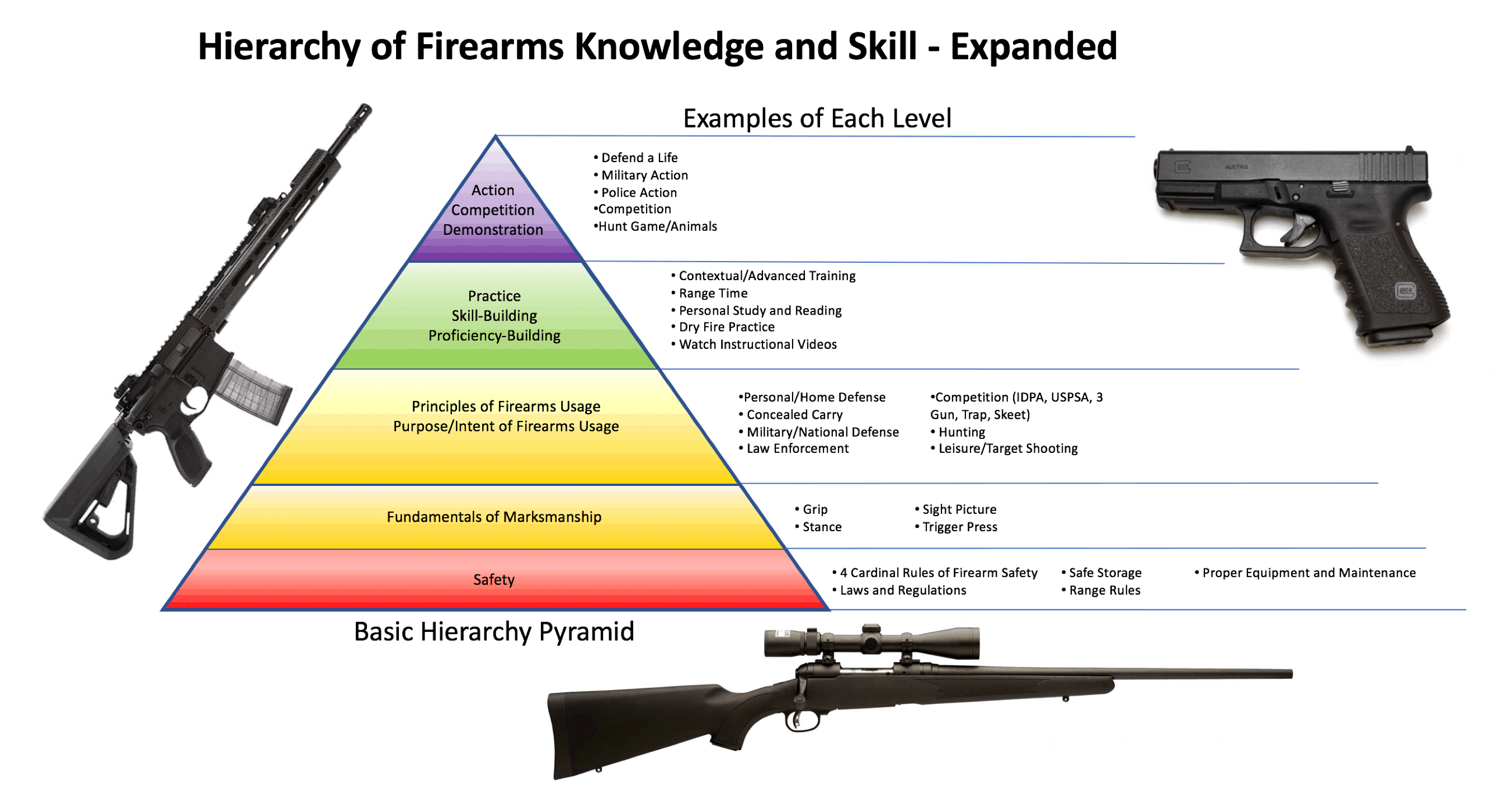 1 thought on “The Hierarchy of Firearms Knowledge and Skill”